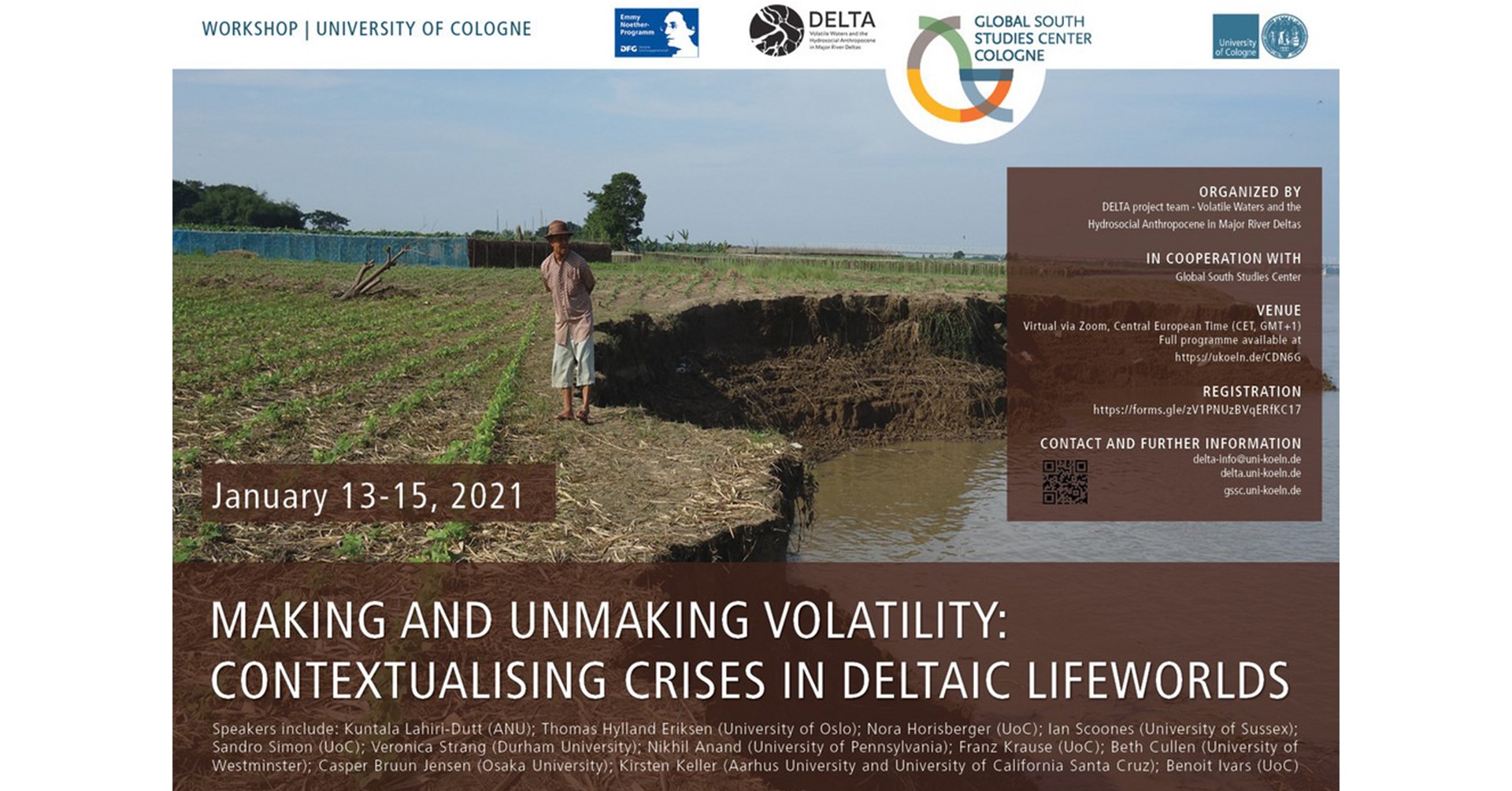 After five years of researching delta life, we want to present and discuss some of our research findings. More specifically we shall be discussing different approaches – both empirical and theoretical – to volatility in deltas and other environments considered as being “in crisis”, i.e. facing profound socio-material transformations.
For more information, including the programme, please visit https://delta.phil-fak.uni-koeln.de/…/making-and…
If you are interested in participating, please register by January 5th, 2021 through this link https://forms.gle/zV1PNUzBVqERfKC17

For the inhabitants of river deltas, uncertain, rapid and often profound changes in land and water conditions are more the norm than the exception. Their lifeworlds are characterised by volatility. In recent years, global research and journalism have increasingly portrayed deltas as undergoing environmental and climatic crises. They describe phenomena like sea level rise, erosion and salinization using terms such as vulnerability, fragility and threat. But do the crises depicted by research and journalism reflect the volatilities experienced by delta inhabitants?

Without denying the extent of the current transformations in these regions, this workshop discusses anthropological approaches to environmental/climate changes in deltas. It probes into the cultural, political, economic and historical contexts in which delta inhabitants experience and negotiate volatilities. The focus is thus on volatility in rather than of deltas, considering that the production and experience of volatility must be put into context. In this sense, the workshop will provide a context for interrogating the totalizing discourse of the ‘delta crisis’ and the necessarily bleak portrayals of changes often documented in global research and media.

On the one hand, the workshop traces how historical developments in these regions, notably their postcolonial past, have shaped the volatile social and material conditions of life. The ecological instability experienced in deltas intersects with histories of political marginalization and economic dependencies. Rapid changes have sustained – and continue to sustain – possibilities and hopes but also serve as a pretext for exploitation and violence. On the other hand, this workshop focuses on the perspectives and practices of delta inhabitants, considering their specific social, economic and geographical positionality and acknowledging that socio-material configurations and their volatility are experienced and negotiated in different – and often unequal – ways.
Developing an anthropological approach to volatile transformations must build on ethnographic insights and hence be rooted in the experience of local inhabitants. Discussing this situatedness implies reflecting on the ways volatile movements spatially and temporally impinge on and are co-produced by people’s everyday lives. This includes critically interrogating notions of movements, (im)mobility and “stuckness”, and exploring the agencies of people negotiating fluctuating and often uncertain conditions of life. This workshop will focus on different approaches –both empirical and theoretical – to volatility in deltas and other environments considered as being “in crisis”, i.e. facing radical social and material transformations. These discussions will contribute to thinking of volatility and change not as overarching conditions of life but as modes of transformation that are socially produced and negotiated. By analysing and comparing different contexts, discussions will provide an opportunity to reflect on the political nature of volatilities and their significance for those who experience them on a daily basis.
+ Google Calendar+ Exporteren naar iCal